The tourism award season has rolled around once again. This year Cape Hillsborough Nature Tourist Park has taken the opportunity to enter in both the Mackay and Queensland Tourism Awards. This is an exciting venture and opportunity to be able to showcase and display our slice of paradise to a number of tourism entities.

The presentation ceremony of the Mackay Tourism awards has recently taken place. We were thrilled to be awarded Gold in the Caravan and Holiday Parks category. It’s not only rewarding but heart-warming to be recognised amongst the top tourism operations in our region.

In the coming weeks the award ceremony for the Queensland Tourism Awards will take place. This is an exciting chance to be able to compete against some of Queensland’s very best caravan and holiday parks. As well as showcase and recognise other organisations and individuals in the tourism sector.

As a part of the Queensland Tourism Awards Cape Hillsborough Nature Tourist Parks story has been captured by the team at Tourism Tribe in a Media Release which can be found in the following link. 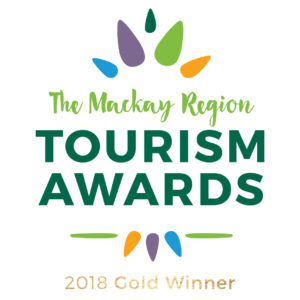 Our success and nomination in both the Mackay and Queensland Tourism Awards would not be possible without the support of each and every one of our guests. We thank you greatly, and hopefully we can bring home the Queensland GOLD to share with you all.