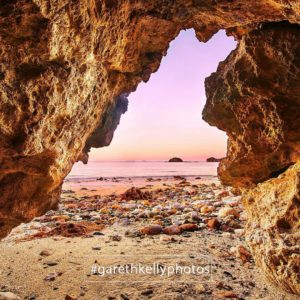 by layers of volcanic ash and pyroclastic materials. The cliffs and rock outcrops overlooking the ocean contain caves and overhangs. Limestone beds laid down in shallow freshwater lakes 33 million years ago contain fossils of ancient turtles and crocodiles. Nearby volcanic plugs represent the sites of volcanoes active approximately 32 million years ago.

The cape is a rugged headland of volcanic rock rising steeply to 268 metres above sea level. Volcanic activity resulted in distinct lava seams interbedded with layers of volcanic ash. Pinnacle Rock, found five Kilometres west of the main visitor area, is a trachyte plug – the core of an extinct volcano.

Other notable rock formations include coarse-grained granites at McBrides Point and limestone and oil shales near Wedge Island.

Cape Hillsborough is the youngest volcanic area in Australia, formed from a series of volcanic eruptions 30 million years ago. The volcanoes spewed molten lava in coastal areas from Proserpine to Mackay, creating the dramatic rhyolite rock and cave formations that border both ends of Casuarina Bay.

As you wander the beaches you become aware of the gold flecks in the sands, this is Mica, a natural earth mineral. Location – All sands at cape Hillsborough. Identification – Golden flecks in the sand. Use: Commercial use in the electronics industry. Ancient legend and folklore claim: Walking on Mica in bare feet is therapeutic to conditions such as arthritis and stiff joints, even curing headaches.

Two of the most abundant gemstone minerals found on these beaches are Chalcedony and Agate. These are two of the extensive quartz group of minerals. Location – They can be found in seams in volcanic rocks and outcrops or as water worn rocks and pebbles along beaches. Identification – Usually translucent (some light can be seen through them when they are held up to sunlight or bright light). Agate – Fine orderly banding throughout the stone (like the rings of an onion). Sometimes light cannot be seen through agate because of extensive colourful banding. Chalcedony – No banding. Has a waxy Lustre (or feel) when rubbed through the fingers. Use: Ornamental gemstone material. Ancient legend and folklore claim: Blood purifier and calming effect when held in the hand.

Another member of the Chalcedony group found here to a lesser degree, as it is relatively rare is called Cornelian. Location – Causeway and Wedge Island. Identification – Same as Chalcedony. The only difference is the colour, it is Blood Red as it has been coloured by iron oxide. Use: Ornamental gemstone material

A significant find here is  Pumice stone. This can be found in abundance on the high tide line. Location – Beachcombers Bay, high tide line. Identification – Grey in colour, porous and very light in weight. Use: Used as an abrasive for calices and cracked feet, elbows etc.

In the same location, quality deposits of  Leopard Stone are found. This is a volcanic conglomerate (mixture of different rocks and minerals cemented together by natural forces) with spotted leopard markings. Location – Beachcombers Bay, high tide line. Identification – As the name suggests, dark and yellowish spotted like markings. Use: Ornamental gemstone material.

One of the two of the most outstanding geological formations in Cape Hillsborough is a pyroclastic (lava) flow containing well formed and sometimes massive  Thunder Eggs.  Thunder eggs are agate geodes (oval like shapes) containing inside in most instances, crystal formations. This is one of the finest examples of Thunder eggs seen in Australia in their natural formation. Location – Between beachcombers Bay and Indian Head on the high tide line. (Caution must be exercised to make this discovery as this may be done only at low tide). Identification – Cavities of various sizes containing multiple crystal formations. Use: Ornamental gemstone material.

The second most outstanding geological formation (yet certainly not the least) is a  Fossil deposit laid down millions of years ago at the entrance to Wedge Island. It is reported in geological data Ostracoda (shells). Gastropoda (Mollusca), Teleostei (fish spines), Chelidae (turtle and fish fragments), Crocodylidae & Coprolites (possible crocodile pieces). The deposit has been explored and confirmed by past extensive Geological reports conducted on this area. Location – Northern end of causeway on Wedge Island on the seaward side at low tide.

Water worn  Topaz has also been identified on the beach at the southern end of the causeway region. It has also reported in documented past studies of this area  Opal  and  Shale oil as well as many other minerals is also found.

Volumes could be written on the unique geology and earth sciences of this magnificent area, yet the most amazing aspect about this region is the peace and tranquility and the interaction of a geological time millions of years old and the natural beauty of flora and fauna that abounds here today.

Remember it is illegal to remove material from a National Park.