Many animals and birds can be observed around the park, in the National Park and the ocean. Wildlife is abundant with more than 140 species of birds, reptiles, turtles, possums and a variety of butterflies. All which can be observed busily going about their lives.

Of particular fascination are the wallabies and kangaroos on the beach at sunrise, if you are up in time to see the sunrise then you will have every chance of seeing the wallabies with a beautiful backdrop. There are several species of wallaby with the Agile Wallaby being the most common in the area.

Are quite sociable. The young are carried in the pouch, and later, on mother’s back. Quite a family affair.

The common brush tail possum is a nocturnal, semi-arboreal marsupial, native to Australia, and the second largest of the possums.

Like most possums, it is mainly a folivore (eating leaves and plant matter), but has been known to eat small mammals such as rats. In most Australian habitats, leaves of eucalyptus are a significant part of the diet but rarely the sole item eaten. Around human habitations, common brush tails are inventive and determined foragers, with a liking for fruit trees, vegetable gardens and kitchen raids. 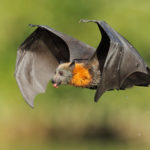 Also known as Flying Foxes – can be heard at night. These nocturnal mammals sleep in the mangroves during the day and often visit the park at night to feast on trees in fruit.

They live in the tropics and subtropics of Asia, Australia, East Africa, and a number of remote islands in the Indian and Pacific oceans. All species of flying fox only feed on nectar, blossom, pollen, and fruit, which explains their limited tropical distribution. Feeding ranges can reach up to 30 kilometres. When it locates food, the flying fox “crashes” into foliage and grabs for it. It may also attempt to catch hold of a branch with its hind feet, then swing upside down – once attached and hanging, it draws food to its mouth with one of its hind feet, or with the clawed thumbs at the top of its wings. 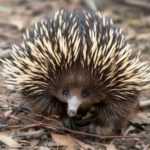 The Australian spiny ant eater is an enchanting relic of ancient life. They can sometimes be seen at night. Don’t touch though – they really are spiny.

The four species of Echidna, along with the Platypus, are the only living mammals that lay eggs. The average lifespan of an echidna in the wild is estimated at around 16 years. When fully grown, a female can weigh up to 4.5kg and a male up to 6kg. The echidna’s gender can be determined from their size, as the males are 25% larger than females on average.

Echidnas are very timid animals. When they feel endangered they attempt to bury themselves, or if exposed, will curl into a ball, both methods using their spines to shield themselves. Echidnas are only found in Australia and New Guinea. 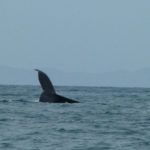 During the whale watching season (July – August are the best months), you may be lucky to see whales and their calves on their annual migration. They often take time out in Casuarina Bay to frolic with their young. A recommended spot to view whales is the Andrews Point walking trail at Turtle Lookout. 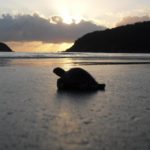 Flatback and green turtles can be seen year round at Cape Hillsborough, especially from ‘Turtle Lookout’ and around Wedge Island. Throughout the summer you may be fortunate enough to encounter turtles laying their eggs on the beach, or their hatchlings heading to the horizon as they struggle to find their way to the water.

Please do not disturb turtles with flashlights or camera flash until they have started to lay their eggs, at which point you are free to take photos. Hatching takes place about 6 weeks later, usually at night under a full moon.

A huge variety of lizards, geckos, skinks and snakes make their home at Cape Hillsborough. While bush walking it is great to see them sunning themselves on the rocks or darting off as you approach. The geckos come out at night to catch insects – they can always be seen around the park buildings where the lights attract the insects. 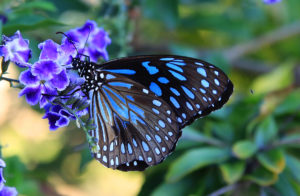 A plethora of butterflies can be found at Cape Hillsborough. Over 20 species have been identified, with amazing variations in colour and shape.

Species such as the Blue Tiger are plentiful and can be seen predominantly in the cooler winter months. During the wet season the Blue Tiger disperses quite widely but in winter the adult butterflies come together in large aggregations of many hundreds or even thousands of butterflies. In the winter dry season, the Blue Tiger does not reproduce and is often seen throughout the day perched on stems and twigs or dead branches beneath the canopy of the forest. This long lived species is a powerful flyer and have been spotted in groups up to 50 km offshore.

The other spectacular species that is plentiful throughout the National Park is the beautiful Ulysses or Mountain Blue butterfly.